This post is an excerpt from a speech Dan Mangini delivered at a World AIDS Day event in 2012. Dan is a very active member of the LGBT community in Philadelphia, as well as an educator, advocate, and public speaker for his passion, HIV/AIDS.  Since his near-fatal diagnosis back in 2005, he has dedicated his time and energy to be the voice/face for this cause.  He has been compelled to do so since so many cannot "come out" with their diagnoses due to the stigma and prejudice surrounding this virus to this day.  He created PoZitive Encounters, the FIRST social night out for those living with HIV in 2009 and has worked nearly full-time as a volunteer with Siloam, which does a mind/body/spirit integrative approach to wellness for those infected/affected.  He was awarded the 2011 and 2012 Philadelphia Rainbow Award for Volunteer of the Year for his work by the LGBT community in Philadelphia and received the Philadelphia Gay News  BEST ACTIVIST Award for 2012. He currently works as a Recruitment & Outreach Consultant with the University of Pennsylvania's HIV Prevention Research Division where he recruits for the HIV vaccine trials currently underway there. 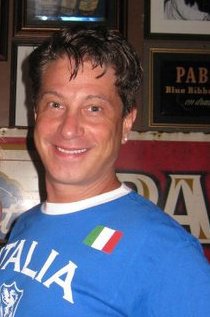 We live in a world where appearances seem to be everything to so many. However, I have learned that often times, what we see and often, even what we believe, are not always necessarily so.

I was born into a large middle-class Catholic family whom I love very much. Looking back through pictures taken at various times, it seems like I had an ideal childhood. Appearances, as we know, can be very deceiving. At a very early age, I experienced the first of many disconnects that life would throw at me. I realized that as a child of barely three years old, that I was very different. I was not like my other four brothers or other boys around me.

This difference, although I did not understand it at the time, did not even go unnoticed by my own father whom rejected me and withheld his love from for many years to come. Not understanding what it was or what I had done wrong, I hid the shame and guilt of my own truth away inside of me and sought to be what everyone seemed to need me to be. It was soon after dealing with all this confusion that I became the victim of sexual abuse over a period of several years. The added pain and guilt were more than a small child should ever have to deal with, yet I endured. I chose to continue to hide all this away for surely this is what a good child was supposed to do. It is amazing how adept a person, even a child, can carry bury emotions and before long, accept them as being normal, familiar feelings and continue to find them time and time again throughout their lives. Years, later, these series of disconnects would come rushing back to the surface and become part of my undoing.

Things began to improve for me once I began to find kindred spirits in my friends in high school and college. I graduated from St. Joseph’s University, met my partner and began embarking on a career that I loved. My partner and I were blessed to become the parents of a niece placed in our custody and whom we raised. To me, I was living my American Dream, and I began to become more comfortable in my own skin, being the “me” that I felt I was. Sadly, what appeared to be a happy life quickly dissolved into a nightmare that I could not ever have imagined. In my mid-thirties, I fell prey to a horrible disease. This disease was addiction. My addiction was with a drug known as crystal meth. After a few horrendous years spent in what I refer to as a living hell, for I cannot imagine nor do I want to, a worse place for a human to find themselves AND after putting my life in harms ways hundreds of times, I decided that I could not go on any further. I was finally void of any sense of connectedness to another living being, God and worst of all, to myself. I had failed and failed miserably at this journey we call life. In a last ditch attempt to end my agony, I attempted suicide by overdose. Once again, just like everything else I had tried, I failed.

Not soon after, there was a glimmer of hope. On Dec 30, 2003, I was arrested. I had lost my freedom but in return, was freed from my addiction and spared my life. While I spent those 15 months away, broken and alone, I spent all my time soul-searching. I needed to understand how my life had gone so terribly wrong and what the reasoning behind my even being alive was. I was determined that going forward I was sure I was meant to make a difference although I wasn’t sure just how that was to be and that I was going to make amends to all those whom I had hurt . I would become the person who finally freed himself once and for all from of all those negative tapes that told me I was less than my entire life. I finally was going to be the Dan that I yearned to be. I allowed myself to feel hope again and believe that things were finally going to be looking up. After all, surely I had endured more than one person should in an entire lifetime. Once again, I was proven wrong!

One week before my release to a 30 day half-way house experience, on March 7, 2005, I was called down to the medical office to be informed that an HIV test, that I had been given nearly four months before, had come back positive. I was not prepared to hear this at all after all that time had passed since testing. I can still remember the surreal feeling of everything turning black and nearly fainting. All I could think was that I was going to die. I finally was getting what I truly deserved. The very next day I was summoned for lab work so they could determine how far along this disease had progressed. It was also going to be the very first time I experienced the fear, stigma and prejudice surrounding this virus that every other person living with it has encountered at one point or another. The nurse adamantly refused to draw my blood or even examine me. Although she was given instructions in the order to do both, she had them take me out of the office. Here was a medically trained person, with knowledge of the disease, who reinforced my feeling that I was tainted and worthless. Shipped off to a halfway house and denied medical services, I collapsed about two weeks later at my workplace and stopped breathing. I had to be resuscitated and upon regaining consciousness, I was informed that new labs were showing that I had full-blown AIDS and PCP pneumonia. According to the doctor and my lab results, I should not even have been alive but for some reason, there I was.

I was eventually released to bed rest after a few touch and go situations and went to stay with a distant friend who offered to take me in. I spent many hours over the next few months tormented with why, after all the other things I had already gone through, had I been given this diagnosis and worse yet, why had I survived. Having stopped practicing my faith many years ago, I even turned to prayer begging for some enlightenment about what God’s plan for me was and asking for another chance. While I waited for the answer, I began focusing on everything the doctors told me I needed to do to regain my health. I also began to educate myself on everything I could find about HIV/AIDS and underwent intensive therapy to try to deal with my past and my diagnosis in a way that would help me move forward.

30 years into this pandemic there have been many huge break-throughs in terms of research and treatments. We owe our lives to them. However, sadly, the one thing that does not seem to have changed a great deal is the stigma and prejudice that exists around this disease. It is the ONLY disease of judgment out there that I know of. When we tell someone we have cancer, we are almost always embraced. When we tell those same people we have HIV/AIDS, those embraces, too many times, do not exist. This creates the worst symptom of all, a symptom that fuels my passion for the work I do. How can one love themselves when many others in this world have judged us unworthy, untouchable, unlovable and even deserving of the diagnosis we received?? Soon, we begin to buy into this and it results in self-loathing, lack of self-care, depression and isolation. Too many I have met in my group felt this and had been broken by it. as a wise woman shared with me at a retreat: “Everything in nature is charged with the glory of God”; these words resonated deeply within me. Everyone and everything had purpose, had worth and was a gift. Looking around at my peers in the room, all who had been afflicted with illness, barely holding on due to poverty and who were struggling with a sense of self-worth were the MOST amazing people I had ever met.

Never in any human beings had I seen such strength, beauty and the resiliency of the human spirit. If the outside world were looking in on us at that moment, by simple appearances standards, they would not think this about us. However, those opinions no longer mattered. Seeing ourselves and each other with new eyes, realizing our own worth, our ability to love ourselves and to reconnect to our very truths, we were suddenly ‘alive” for the first time in many, many years. It ignited a fire within me that was to transform my life. I could look into the mirror and for the first time in nearly 40 years, know that my truth was worthy of love and that I loved myself fully. AIDS did not win this battle, yet has become the greatest blessing in my life. When I say this to people, they are often are shocked. Without my entire journey and my diagnosis, I would not have found myself. I know now what is important in life and it’s certainly NOT appearances. While by appearances I am not wealthy or famous, I am rich in spirit and in love. I would not trade places with anyone in the world.